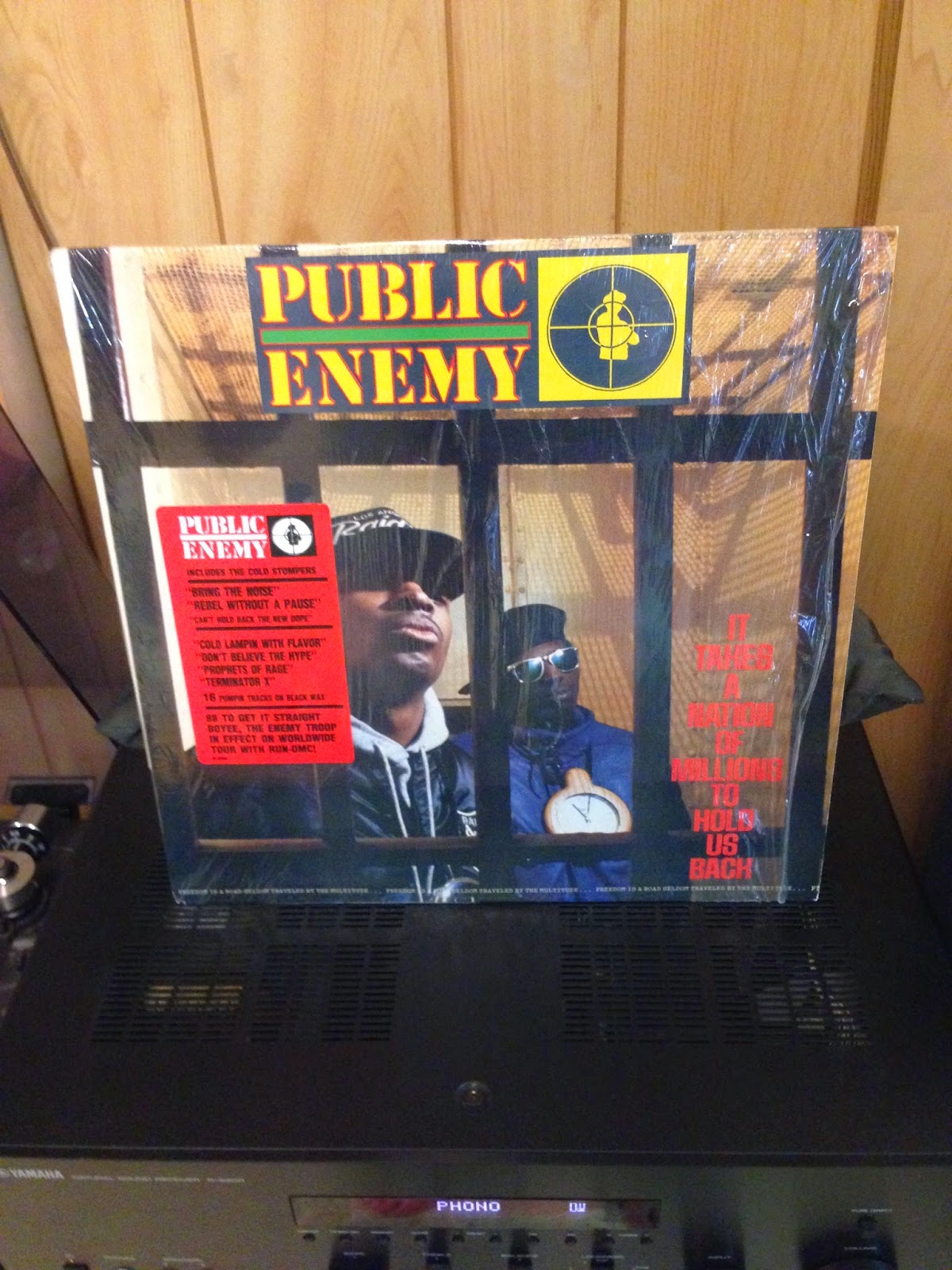 Public Enemy It Takes a Nation of Millions to Hold Us Back (Def Jam, 1988)


At this juncture in time critically assessing Public Enemy's 1988 opus is a moot point, it's akin to speaking on the relevance of the Beatles, Stones, Hank Williams, Coltrane, et cetera. P.E. are towering figures who, indisputably, created a shift in aural environs. Anyone that doesn't at least acknowledge their achievements, regardless personal opinion, is quite plainly... D.U.M.B. Chuck D's intelligent, angered, and passionate lyrics, combined with the near minstrelsy buffer of Flavor Flav to distract from the facts, the Assault Technician given ample time to speak with his hands (DJ Terminator X), and the Bomb Squad on production—doing their name proud with ground-quaking aggression and heaviness—were a mighty, choice combination.

Placing that all in mind, recently some memories were triggered after picking up a minty, in-shrink with promo sticker intact copy of the LP (which I hadn’t previously owned on wax) on the cheap at a block sale. So, in lieu of diving inside this modern miracle of sound—you can find plenty of that elsewhere—I'll instead relay some personal experiences that wind around this album somewhat tangentially... as I'm known to communicate...

The Birth of the Young Cannibal

For those familiar with my writing about privately-pressed obscurities in many realms of the rock spectrum, and my affinity for '30s-'70s entrenched sounds, it may come as a surprise that all of this sprouts from my youthful background as a fanatical, faithful follower of hip-hop—where my fannish attention to detail and passionate concentration bloomed. My evergrowing interest in the history of music criticism found footing during this period, via fastidiously devouring The Source (with a non-breaking streak of every issue from late '92 through roundabout early '98 still hard-filed in the home office), Rap Sheet, Rap Pages, Word Up! / Right On!, early Vibe, XXL and the like, while inquisitions inside the lyrical choices of my fave-raves of the day served to nurture an interest in the winding roads of vocabulary.

Following the trails into activity I began cobbling together my own rhymes (and still do from time to time today... more on that at a later date), and several years later began connecting with fellow-travelers when first exposed to the interweb. This "building" occurred while I was attending a running-start program at the local community college as an adjunct to my high school studies. Among the many folks I met online was a man named Brian Dillard (aka Dabri) who was the founder of an organization for the preservation of the hip-hop culture—the four elements, natcherly: MCin', DJin', breakdancing, and throwin' up brightly hued graffitti on walls—called Ill Crew Universal (aka ICU). Within a short period of time I became an active and key member in ICU, including recruiting members to the organization. In our first three years of existence we swelled to over 80,000 members worldwide, issued a handful of compilations composed of tracks by worldwide members, and in 1997 had a big shindig in the Bay Area where many members convened to perform and build over a weekend.

Frustrated by the strictures of institutionalized learning, and with increased involvement in ICU I opted to snatch up my GED ASAP and troop down to the Bay Area as swiftly as possible—though, a change-up with my ICU partners repositioned my final destination to Southern California (the La Puente / City of Industry area in LA County). Working together once I'd made my move Dabri exposed me to the non- hip-hop faves of his KROQ radio obsessed SoCal youth, and this is where I first became wise to '80s underground rock and punk—some of which I had faint memories of via having a sister twelve years my senior in the '80s. This was an incredibly eye-opening experience in connecting the dots for me, as up to this point I was virtually hip-hop culture bred'n'fed. Unlike many of my generation whose underground launching point was the gateway drug blast of Nirvana—I only recall irritation that Yo! MTV Raps was postponed at the time of Cobain's death—or someone with a hip older sibling or cousin, I found direction from my good friend. As an easy transition the first artists I latched onto (Dead Kennedys, the Clash, Devo, etc) with gusto carried much the same spirit as my hip-hop heroes, while I also opened my eyes back up to my pre-teen obsessions with the California Raisins singing soul classics and Chipmunks going moptop, and everything came full circle. During this time I picked up the scent for weirdos like Camper Van Beethoven, (early) XTC, Frank Zappa and Captain Beefheart. So, my initial spins fit in with the same trends and yarns I'd been following to that point.

ICU continued to flourish and attract attention from some heavy players, though we began to have less and less time to deal with it (just trying to get by), which coalesced in meetings concerning an outside party taking over ownership of the organization and hiring us on as employees to continue and further the cause. That man was Carlton Douglas Ridenhour, better known by his stage-name... Chuck D. Though, due to personal falling outs, the position which was offered to me by Dabri to work directly under Chuck vanished into the mists, and I trailed back to the milquetoast environs of Eastern Washington state—and the deal never went down (but, another visible player was openly known to have copped some of our moves).

This is just a brief chapter from the beginning murmurings of my future action... So, when ya see me beatin' feet down the street don't let the book deceive ya...


(ahem)...If be you the sort that transits in digital, please drop your sounds here for my perusal and amusement:
Send me
your sounds
note energy (\ˈnōt\ \ˈe-nər-jē\ )
:spiritual sustenance provided by the perfect combination of notes and words, bringing about the sensation of excitation
Posted by Jeremy Cargill at 3:50 PM