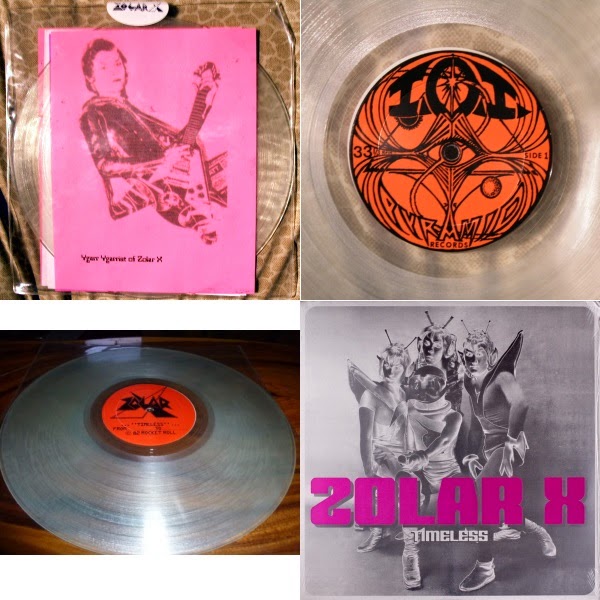 Sonic outliers of the '70s Hollywood glam / Rodney's English Disco Scene (where they played regularly), Zolar X, as Rodney Bingenheimer himself said were, "...of course, one step ahead of everybody," beaming down to earth in 1973.

Zolar X took a "method" approach to performance and donned their outrageous garb influenced by early B-grade sci-fi/comics (where they also borrowed lyrical ideas), identical shags with center-pointing bangs resembling a helmet when taken as a whole, and spoke in an invented dialect on and off stage. Their self-described "Space/Punk Rocket Roll" was an amalgam of high-wired hard rock'n'roll buyoed by Bowie (Ziggy-era, natch), snatches of Sabb'esque sounds, manic, laser-driven keyboard fire, and some raw power blenderized into a space-driven proto-punk/proto-metal stew.

Co-led by Zory Zenith (Billy McCartney - lead vox*) and Ygarr Ygarrist (Stephen Della Bosca - lazor lead gtr) from '73-'81 before dematerializing, this 1982 posthumous release in non-descript packaging collects tracks from three recording sessions—the bulk of which were, oddly, produced and engineered by Memphis titans James Dickinson and Terry Manning, respectively. The set begins with "Recitation", some lost language incanting, bringing you into their created/imagined world, before surging into an ode to eternal life for all in the anthemic "Timeless," and hits on several space-floating concepts along the way ("Test Tube Baby"—that's how we're made now, dig?; "Space Age Love," a tale of love in space environs), but what separates them from others is less poetic remove, replacing metaphors with words concerning everyday occurrence. Though, the crux of all they stood for in sound and vision resides in the four-part "The Horizon Suite: Overture on Air / Tomorrow's Sunrise / Inside the Outside / Sound Barrier," where they reach their heaviest heights and most dramatic, adrift in space dust mellow, with rumbling Iommi-worthy doomy riff charge and some James Williamson'esque leads. They went all the way, and for forty entrancing minutes you too can get lost in space with Zolar X.
*Also original drummer for LA street glam outfit Shady Lady.

[Also available as an Alternative Tentacles CD w/ bonus tracks. And, languishing in post-production is Zolar X: Starmen on Sunset, a documentary on the band.]


(ahem)...If be you the sort that transits in digital, please drop your sounds here for my perusal and amusement:
Send me
your sounds
note energy (\ˈnōt\ \ˈe-nər-jē\ )
:spiritual sustenance provided by the perfect combination of notes and words, bringing about the sensation of excitation
Posted by Jeremy Cargill at 9:44 PM